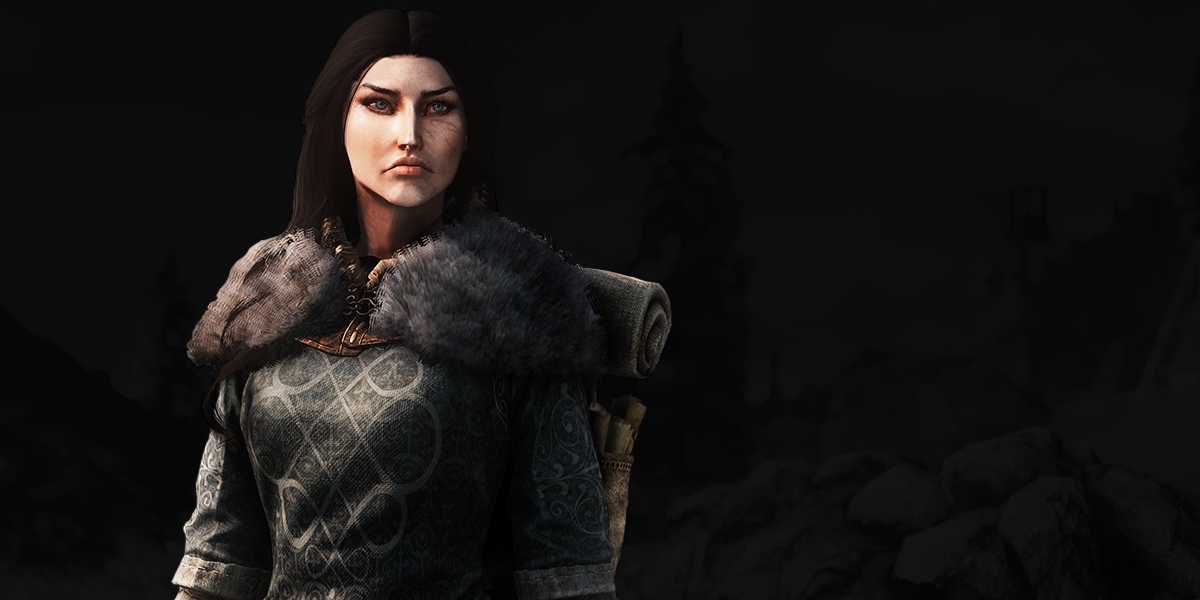 Initially raised as a ward of the state, Euphrosyne began displaying a talent for magic when she was just six years old - something which alarmed and unnerved her caretakers. She was a particularly quiet child, and her habitual shyness, especially around strangers, often came across as sullen or menacing. Euphrosyne spent at least part of her childhood training at the Mage's Guild in Cyrodiil, before studying at Imperial City's Arcane University. Imperial magical education is known to be especially thorough, and many alumni go on to become masters of the craft. Despite this, Euphrosyne wasn't much of a scholar, preferring more physical pursuits over days spent studying tomes and writing articles. Though her mentors tried to push her towards a career in academics, Euphrosyne enlisted in the Imperial Army shortly after leaving the University.

Euphrosyne served for several years as a war mage, part of the back-line support corps who helped control the battlefield with alteration magic, destruction spells, and deadly illusions. The rigid structure provided by military life seemed to suit Euphrosyne; she rarely seemed to find fault with her orders, and enjoyed a tight-knit bond with the rest of her unit. Despite this, Euphrosyne's ruthlessness - both on and off the battlefield - made her a figure of some nervousness. When the Aldmeri Dominion declared war on a weakened Empire, the Imperial Army had no choice but to mobilize the bulk of its war mages against the Altmer sorcerers. The ensuing massacre affected Euphrosyne deeply. Having lost many of her friends in the battle, she never forgave the Empire for its decision to sign the White-Gold Concordat with the Dominion invaders. She subsequently abandoned her post with the Legion, joining the ranks of the other deserters who had fled into Hammerfell and neighbouring Skyrim.

Euphrosyne managed to secure temporary work in Dawnstar, a province on the northernmost edge of Skyrim. Here, her days were spent managing the town's persistent skeever problem, whilst her nights were spent drinking to forget the horrors of the Great War. It was during this time that she began to hear about an increased Dominion presence throughout the rest of Skyrim, and it wasn't long after that before the Thalmor arrived in Dawnstar. Upon learning that they were there for her, Euphrosyne reacted predictably badly: killing the Thalmor agents and drunkenly setting fire to part of the town, before staggering off into he night. She was subsequently discovered by a travelling priest of Mara, Erandur, who dragged Euphrosyne's unconscious body back to the abandoned Windcaller Temple. There, he shared his knowledge of a strange figure who had passed through Dawnstar a few months before. Known as the last dovahkiin, this legendary slayer of dragons had reportedly been heard spreading anti-Thalmor sentiment in the south of the region. Though loathe to get involved in another war, Euphrosyne decides to seek the dovahkiin out, with Erandur's assistance.

Effie doesn't do well with uncertainty: she likes to know what to expect and what's expected of her. Disciplined and intense, she thrived under the Imperial Army's clear-cut hierarchical system. Effie struggles to relate to other people, who she finds frustrating and unpredictable, and often comes across as scornful or indifferent of their attempts at friendship. She's intelligent, a natural scholar, but prefers to dedicate her time to physical pursuits; the priestesses at the orphanage described her as unruly and independent. Effie as a somewhat black-and-white way of thinking, and by the time we meet her in Dawnstar she's already suffering the effects of life as a deserter. Her feelings towards the Imperial Empire remain conflicted, and she is still haunted by many of the things she saw during those ill-fated battles against Dominion mages.