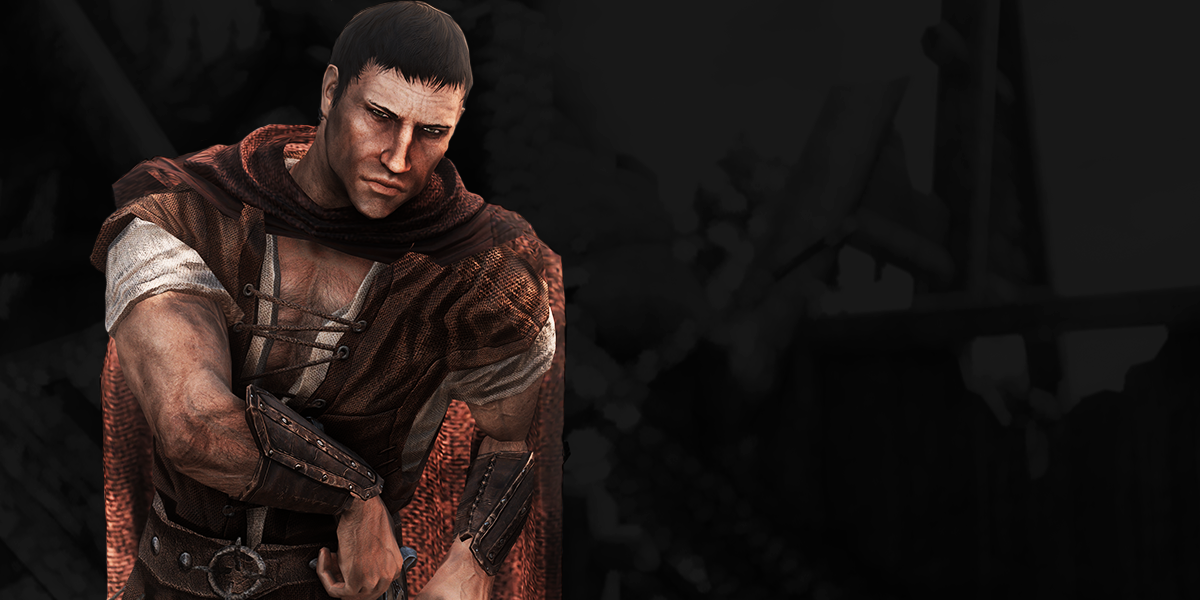 Marius was born in Skingrad, a city in Cyrodiil noted both for its wealth and its large, well-attended chapel. His affluent parents ensured that their only son was held to a high standard, organizing his life down to the most minute detail. Marius received a prestigious education before enlisting in the Imperial Legion, where his rapid ascension to the rank of Captain was largely attributed to his parents' influential position in Imperial politics. Despite this, Marius never comported himself anything less than admirably. His loyalty and tenacity were well-known, and he easily distinguished himself in the early days of Cyrodiil's war against the Summerset Isles. Unfortunately, he became more infamous for his unwavering adherence to proper protocol. Even Marius' commanders saw him as a bit of a stick-in-the-mud, with the reception from his peers being less flattering still. Though he commanded scores of men in battle, Marius could count only half a dozen friends among them.

As the Legion prepared to march on Skyrim, Marius' rivals were already seeding his eventual downfall; those who were either threatened by his meteoric rise to power, or had received a dressing-down for some minor rule infraction. When General Tullius himself asked Marius to lead an Imperial ambush just outside Rorikstead, the loyal soldier could do nothing other than agree. For six days and six nights, Marius and his men lay in wait at Darkwater Crossing. However, when they finally apprehended a group- of Stormcloak soldiers crossing the border into Skyrim, Marius found himself arrested alongside the rest of the rebels. His crime? "Official" documents which apparently proved that he had been working with Ulfric Stormcloak and the rest of the insurgents to undermine the Imperial war effort. Remanded to Helgen without trial, Marius only narrowly escaped execution when a deadly dragon attack forced the Imperials to retreat.

Left to the mercy of the Stormcloak soldiers, Marius was swiftly taken back to Windhelm as an official prisoner of war. En-route, the group fended off another dragon attack which revealed Marius to be the legendary dovahkiin, whose arrival in Skyrim had long been prophesied. Though disappointed to find that the saviour of Tamriel is none other than an Imperial commander, the rebels also know that Marius is too valuable an asset to be allowed to walk free. He is currently being kept under lock and key in the northern city of Windhelm, where he is both guest and prisoner to the enigmatic Jarl Ulfric Stormcloak. Adrift in a land he doesn't recognize, and at the mercy of a people whose rights he once tried to suppress, the lord Stormcloak offers Marius an unexpected choice. Ulfric believes that the Dominion have something to do with the conspiracy to frame Marius for crimes against the Empire, and that the answers he seeks lie somewhere in the Thalmor Embassy north of Solitude. For the price of his assistance in the civil war, Ulfric will ensure Marius gets the justice he desires. Otherwise, Marius will remain in Windhelm until the war's conclusion. With no other options available to him, Marius grudgingly accepts Jarl Ulfric's offer.

Marius was raised on a diet of duty, honor, and ambition; specifically, the ambitions of his high-society parents. As a result, he has never wanted for certainty. Precise and composed, he is a capable commander and an excellent field tactician, as well as a loyal, obedient soldier. Marius is renowned for his confident and courageous leadership, but many of his peers loathe his inflexible, dogmatic approach to the rules. Despite this, he considers his punishments both fair and just. Though he was good at forging political connections, Marius considered friendship with lower-ranking soldiers to be indecorous, which did nothing to ameliorate his reputation as a stuck-up general. Losing his commission as captain has set Marius entirely adrift, and his time in Windhelm has proven to be a humbling experience. Stripped of his rank and his responsibility to the Empire, Marius is a paladin without a cause, something that makes him easily deceived by those looking to weaponize him against his allies.